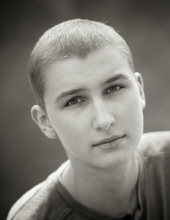 Andriko was born in Charlottesville, VA and ten days later moved to Norfolk. When he was fifteen months old, Andriko and his family moved again, this time to Vienna. He spent kindergarten through fourth grade at Marshall Road Elementary School, then transferred to St. Mark. Andriko graduated from St. Mark in 2018 and recently completed his sophomore year at Bishop O’Connell High School. In May of 2020, Andriko graduated from thirteen years of Saturday School at The Taras Shevchenko School of Ukrainian Studies in Washington.

Andriko was a member of the Washington DC branch of Plast Ukrainian Scouting Organization - USA and enjoyed many summers of Plast scouting camp at Vovcha Tropa in New York State. Andriko also had fond memories of his time spent at the Roma Pryma Bohachevsky Ukrainian Dance Camp in New York. Andriko also found tremendous pleasure in his violin, reading and soccer. He was happiest pursuing these endeavors and was deeply interested in classical music, theology and philosophy.

Andriko leaves behind his best friend, his devoted younger brother Peter. Spending time with Peter was, without a doubt, Andriko’s favorite and most valuable activity. Also left in mourning are his parents Andrea and Ivan, and family in California, Georgia, Massachusetts, Michigan, New Jersey, New York, Canada and Ukraine.

Andriko humbly expressed a wish, that if anyone chose to honor his memory, that in lieu of flowers, people consider supporting the following non-profit organizations:

To order memorial trees or send flowers to the family in memory of Andrew 'Andriko' Luka Bilaniuk, please visit our flower store.