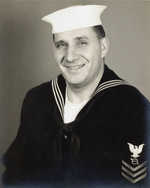 Benjamin John Million of Kerhonkson, NY, died March 15, 2013 at Hudson Valley Hospital. Ben was born on August 7, 1926 in Queens, NY and was 86 years old at the time of his passing.  He was the son of the late Benjamin and Marion (Murphy) Million. Most recently Ben was living at the New York State Veterans Home at Montrose.

Ben proudly served his country in the United States Navy, first enlisting in 1944. He was a twenty year active duty veteran who had served as a Operations Specialist First Class during WWII, the Korean Conflict, and Vietnam. Among the ships Ben served on were the USS Tarawa, USS Sprig, USS Tumult, USS Pine Island, USS Yorktown, and USS Alfred A. Cunningham. After receiving his honorable discharge in 1968, Ben was transferred to the US Navy Fleet Reserve. Ben officially retired after a thirty year career of dedicated service to his country in 1978.

A memorial visitation will be held on Wednesday, May 8th from 10-12pm at HB Humiston Funeral Home, Kerhonkson. A celebration of his life will follow at 12pm at the funeral home. Burial will be at Pine Bush Cemetery, Kerhonkson.

To order memorial trees or send flowers to the family in memory of Benjamin John Million, please visit our flower store.