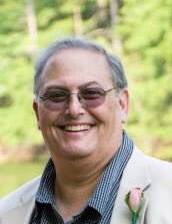 Boris Lonkewycz, age 65, passed away Tuesday, October 23, 2018, at Albany Medical Center, surrounded by his family. Born January 21, 1953 in Bronx, NY, he was the only child of Paul and Kornelia Lonkewycz.

Boris was raised in the Bronx, where he grew up with a large extended family that include his cousins Alexandra, Dana, and Shanya, whom he referred to later in life as his sisters. Boris graduated from DeWitt Clinton High School and attended Lehman College, where he majored in history. In 1972 Boris began his career at JP Morgan, commuting to Manhattan everyday for 34 years.  He retired in 2006 as Vice President of Accounts Payable.  In his spare time, Boris volunteered with the Town of New Windsor Little League, acting as both treasurer and later, vice president. After his retirement, Boris enjoyed travelling with his wife Christina, and especially looked forward to the time they spent together in Cape Cod every summer. He was truly dedicated to his family and found his greatest joy in his role as “Papa” to his grandchildren.

Besides his loving wife of 42 years, Christina, Boris is survived by his mother Kornelia, his children Arianna (Damian) Masterson and Nicholas (Zorielle) Lonkewycz, and his three grandchildren, Mateo, Finnegan and Penelope.  His cousins; Alexandra Dutka, Dana Lenec, Natalka Sawchuk (Chris Blay), and Roxalana Sawchuk (Driss Zoukhri). Nieces; Isis and Julia Zoukhri, and his nephew Andrew Lenec. Aunts and Uncles; Zen and Olga Sawchuk, and Nadia Sawczuk. And his goddaughter Alana Schmidt and her husband Nick. He was predeceased by his father Paul Lonkewycz and his granddaughter Scout Masterson.

Visiting will be held on Tuesday, October 30th from 2-4 & 6 – 8:30PM at the H. B. Humiston Funeral Home, 30 42nd Street, Kerhonkson.  The Divine Liturgy will be Wednesday, October 31st 10am at Holy Trinity Ukrainian Catholic Church, Kerhonkson. Burial will follow at Pine Bush Cemetery, Kerhonkson.

In lieu of flowers, contributions may be made in Boris’ name to the St. Joseph’s Adult Care Home, Building Fund, PO Box 8, Sloatsburg, NY 10974.

To order memorial trees or send flowers to the family in memory of Boris Lonkewycz, please visit our flower store.