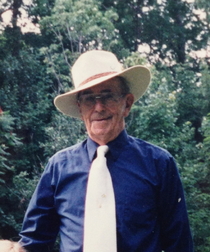 Carlton L. Schoonmaker died peacefully in his sleep at his home of 63 years on May 30th, 2014. Born April 25th, 1918,  to Joseph Schoonmaker and Helen Churchill, he was a life long resident of Kerhonkson, NY.

Carlton served in the US Army from May 14th 1941 until Oct 23rd 1945 where he fought in WWII as a tank commander facing combat at the Battle of the Bulge in the European campaign. He received several commendations including the American Defense Service Medal and the Bronze Star.

Following the war Carlton became the owner of Foordmore Farms Dairy for many years, finally closing the business and working with West End Dairy in Ellenville, retiring in 1982. After formal retirement he continued to work as a painter and wallpaperer and general all around handyman for anyone who asked.  His dairy business had him delivering dairy products to a wide network of families, small businesses and hotels.  As a result, and for a quiet man, he had developed long time friends and acquaintances who knew him to be honest, reliable and always willing to help.

Carlton was a charter member of the Kerhonkson Lions Club for 55 years and served as president for several terms.

Over the course of his life he was a proud member of the Federated Church of Kerhonkson, the Napanoch Elks Lodge and the Rondout Valley Rod and Gun Club.

His accomplishments as a civic-minded citizen of Kerhonkson included securing funds for band uniforms allowing the Rondout Valley Central School Band to perform at the 1964 Worlds Fair in Queens, NY. Three of his four children performed at the fair.  He and Thelma couldn’t have been more proud.

On any day, weather permitting, you could always find Carlton sitting on his front porch surrounded by his greenery and his hummingbirds, ready to recount vivid memories of his 96 years. Or complain about the politics of the day.

Carlton is survived by three children; Carla Vel-MacLeod and husband John, residing in Brooklyn, NY, Lucy Ruhle-Goodchild and husband Richard of East Fishkill, NY, and Thomas Schoonmaker and partner Kathy Harte of Sharon Conn. and Warwick, RI.  He is also survived by six grandchildren; Tanya Amato and her husband John, Justin Schoonmaker and his wife Lauren, Melissa MacLeod, Katharine Ruhle and her fiancé Luca DiCerbo, Kevin Ruhle and Hannah Schiffer. Four great-grandchildren: Gregory and Michelle Amato, Colin Tondreau MacLeod and Emily Schoonmaker; his niece Joan Schoonmaker Buley and her husband Irving and his dear friend of many years, Laurene Stanton and her daughter Maureen Stanton and husband Kevin McHugh. He was predeceased by his youngest son, Joseph who passed June 10, 2004.

Visiting hours will be held on Monday, June 2nd from 5-8pm at H.B. Humiston Funeral Home, Kerhonkson. A celebration of his life is scheduled for Tuesday 10am at the funeral home. Burial will follow at Pine Bush Cemetery, Kerhonkson.

In lieu of flowers, please make donations to the American Cancer Society or the Alzheimer’s Association.

To order memorial trees or send flowers to the family in memory of Carlton L. Schoonmaker, please visit our flower store.