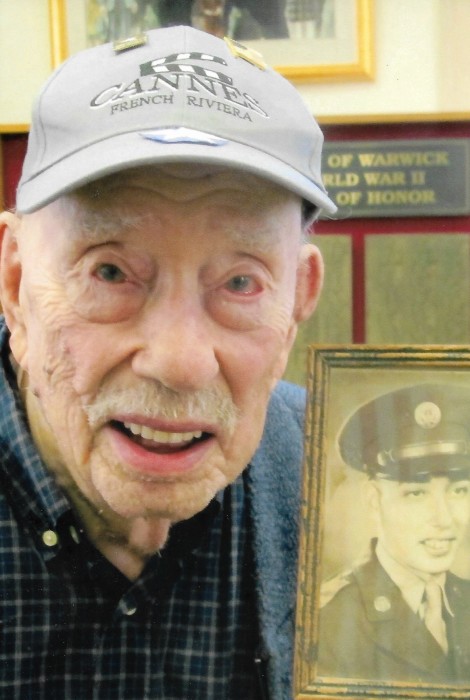 Charles Condren reported for service in the U.S. Army at Fort Dix (NJ) on 28 April 1943, at the age of 18. In addition to being an infantryman, Charles was trained as a communications field lineman as part of the 15th Infantry, 3rd Division (nicknamed the ‘Rock of the Marne’). On 10 July 1943, Charles was a frontline participant in the invasion of Sicily (the town of Licata) under the command of Gen. George S. Patton and the U.S. Seventh Army. On 9 September 1943, Charles and the 3rd Division invaded Salerno, then continued their liberation of Italy with campaigns in Naples, Foggia, Rome and Arno before entering the south of France in April 1944. PFC Condren entered Paris one week after its liberation by allied forces on 25 August 1944. He continued his service in various campaigns throughout France until he was discharged from the U.S. Army on 20 December 1945. Charles was an honored recipient of the Bronze Star with Valor, Combat Infantryman’s Badge, EAME Service Medal with Arrowhead, the rank of Chevalier in the French Legion of Honor, and recipient of La Croix Valmer by the French government. His service has also been commemorated with the placement of an inscribed pavement stone at the WWII Walk to Victory Museum in Sainte Mere Eglise, France.

After WWII, Charles worked as a machinist for the Brownell Electro Corp. (currently Superior Essex Brownell) until his retirement in 1990.

Friends are asked to raise a glass to Charles’ memory and offer an Irish toast.

“May joy and peace surround you, contentment latch your door. And happiness be with you now and bless you evermore.”

To order memorial trees or send flowers to the family in memory of Charles Edward Condren, please visit our flower store.