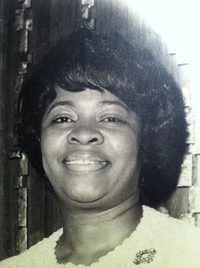 Doris Terrell of Kerhonkson, NY passed away Thursday, April 25, 2013 at her home. She was 82. Doris was born in South Carolina on October 9, 1930; she was the daughter of Simon and Sally Mae (Archie) Peake and the widow of William E. Terrell.

On April 27, 1963 Doris married William Terrell. They lived in the city spending weekends in Kerhonkson since 1964. Mrs. Terrell had worked as a secretary for the American Civil Liberties Union in New York City and later became the office manager for Bill’s printing company, System Bindery. She and Bill moved to Kerhonkson permanently 1997.

Doris is survived by her sister Bernice Peake Payne of Philadelphia, PA and several nieces and her granddaughter Deena Terrell.

Visiting will be held on Saturday, May 4th from 2-4pm at H.B. Humiston Funeral Home, 30 42nd St., Kerhonkson, NY. A funeral service will follow at 4:00pm at the funeral home.  Inurnment will take place at a later date at Fair Lawn Memorial Cemetery, Fair Lawn, New Jersey.

To order memorial trees or send flowers to the family in memory of Doris Terrell, please visit our flower store.