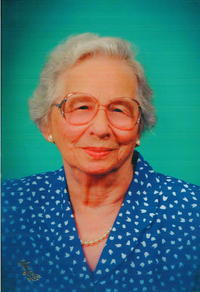 Evelyn (Eeuwkje) de Jager of Accord, NY passed away peacefully on Tuesday, September 17, 2013 at the Golden Hill Health Care Center. She was 102 years old. Evelyn was born on May 4, 1911 in Friesland, Netherlands; she was the daughter of Eeltje and Akke van der Kooij.

Evelyn along with her husband Arthur emigrated from the Netherlands to the United States in 1957. They moved from Vermont to Southern New York, eventually settling in Accord in 1966 at the Mohonk View Farm. She was very active on the dairy farm being the bookkeeper for many years. Evelyn was an avid reader who also enjoyed sewing, knitting, crocheting and gardening.

Mrs. de Jager was predeceased by her husband, her brother and sister and her great-grandchildren Christian and Michelle.

Visiting will be held on Friday, September 20th from 6-8pm at H.B. Humiston Funeral Home, 30 42nd Street, Kerhonkson. A memorial service is scheduled for Saturday at 11am at the Goshen Christian Reformed Church, 2440 State Rt. 17A, Goshen, NY followed by a graveside service at 4pm at Benton Bar Cemetery.

To order memorial trees or send flowers to the family in memory of Evelyn de Jager, please visit our flower store.