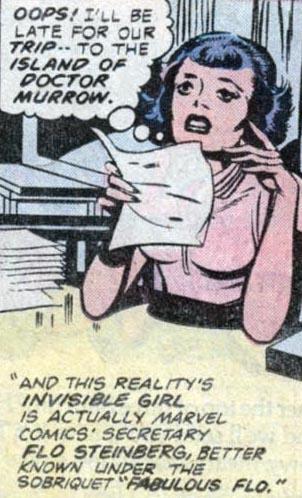 Florence Rae “Flo” Steinberg died July 23, 2017, in New York City. Born March 17, 1939, she was an American publisher of one of the first independent comic books, the underground/alternative comics hybrid Big Apple Comix, in 1975. Additionally, as the secretary for Marvel Comics editor Stan Lee and the fledgling company's receptionist and fan liaison during the 1960s Silver Age of Comic Books, she was a key participant of and witness to Marvel's expansion from a two-person staff to a pop culture conglomerate. Steinberg appeared in fictionalized form in Marvel Comics, spoke at comic book conventions and was the subject of a magazine profile and several interviews. Steinberg was born in Boston, Massachusetts, to Harry and Sally Steinberg. She was raised in the Dorchester and Mattapan neighborhoods of Boston. There she attended Roxbury Memorial High School for Girls, serving a term as president of the student council. She majored in history at the University of Massachusetts Amherst, where she was a sister of Sigma Delta Tau sorority, and received her B.A. in 1960. Afterward, while working as a service representative for the New England Telephone Company in Boston, she was a volunteer on Ted Kennedy's first U.S. Senatorial campaign. After moving to New York City in 1963, she additionally worked “in a minor way” for Robert F. Kennedy's Senate bid. After her time at Marvel Comics, she worked as a proofreader for the American Petroleum Institute for a while, spent a year in San Francisco, where she became part of the underground comics community, and then went back to New York City to become an editor/proofreader for Arts Magazine. In the 1990s she was asked to come back to Marvel as a proofreader, a job she held on a part-time basis for the rest of her life. Flo is survived by several cousins, many loving friends and her cherished godson, Alexander Spurlock Trimpe. She was predeceased by her parents and a sister, Ruthie. Graveside services for Flo were held on Thursday, July 27, at the Kerhonkson Synagogue Cemetery, with “Reb Sally” Shore-Wittenberg officiating. Funeral arrangements were made by H.B. Humiston Funeral Home of Kerhonkson.

To order memorial trees or send flowers to the family in memory of Florence "Flo" Steinberg, please visit our flower store.