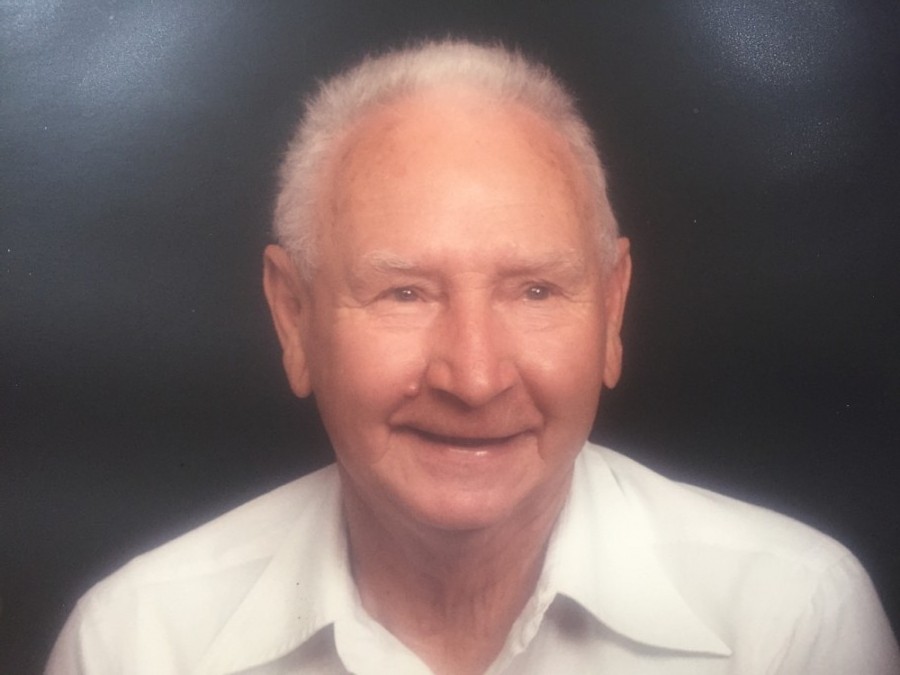 Floyd F. Shanley, originally named Florence in honor of his many male ancestors on the Driscoll side, was born on December 30, 1917 in the Windsor Terrace community of Brooklyn, NY.  Known throughout his life by different names to different people—Frank, Buddy, Bud (his favorite brew),Florine, Ace, Francis, and Slant, Floydwas surrounded by family members and a close neighbor when he passed away peacefully at home in Olivebridge on June 20, 2015.  This boy named after his forebears with that unusual Irish male name is survived by his sons-- Louis from West Palm Beach, Florida and Peter from Olivebridge, by his daughter Gail Shanley Corso (Charles) from Mt. Royal, NJ, and by his grandchildren, Christopher Corso (Sabina Fletcher) of Sewell, NJ, and Gina Corso of Franklinville, NJ.

Floyd, “the last leaf,” is predeceased by his beloved parents, Louis and Mary, each of his seven siblings, four of his nephews and nieces, most if not all of all of his many first cousins, his wife’s sister and husband, his precious and beloved wife, Virgie (Virginia), and his eldest son, James Floyd.

Floyd’s life has drawn him down many tracks.  Along this journey, he experienced many hardships, but most importantly, through all of his transitions, he has taught others the beauty of the enduring human spirit. His story truly inspires all those with life’s little bumps on the road.

Born and raised in Brooklyn, Floyd until days before he died, told numerous stories about his amazing adventures. A lover of homing pigeons, as a young man, he became part of a neighborhood homing pigeon club in Brooklyn.  The pigeons seemed to have been for him early forms of the telegraph or the Internet.

From his youngest years, each of his jobs somehow related to transportation on air and ground and communications. A graduate of the Manual Technical High School in Manhattan, he mostly was self taughtin the liberal arts to satisfy his passion for knowledge.  He had tremendous respect for reading, engaging in conversation, listening to the radio, and watching movies. He spoke eagerly about life during the Great Depression as then he was a child coming of age. His stories about life during Prohibition compel the listener.  A great lover of history and fine books, storyteller Floyd was an avid enthusiast of aviation history and the biographies of Charles Lindbergh and Teddy Roosevelt.  He also enjoyed books by Mark Twain, Thomas Merton, and A.J. Cronan.  Floyd’s history, for sure, is one that tells part of America’s history.

To survive the Great Depression, Floyd in the 1930s served in the Civilian Conservation Corps.  Most of his salary, sent home to his mother, contributed to the well being of his mother and younger siblings.  In the CCCs, his assignments brought him to western states where he worked with teams who came from many different places.  They built dams and log cabins for park rangers.  His great love for nature probably was nurtured further during these early life experiences when he saw wildlife and the wonder of the vast landscape.

His photo scrapbook of these times shows his images of the great Western frontier and Southwestern desert: Grand Tetons, Lake Jenny, the Grand Canyon, American Indian Pueblo cave dwellings, eagles, a bear up close, and him amidst groups of young men all reciprocally surviving and contributing to the vitality of their nation.  While in the CCC, he worked in many states, including Utah, New Mexico, California, Wyoming, Colorado, and Nevada. Floyd’s photos of the Four Corners and Yellowstone National Park sharply contrast with his urban upbringing, and perhaps capture his deepening respect and love of nature far from those rooftop pigeon coupes.

After his CCC experiences, Floyd served in the National Guard, and also, the Army Signal Corps before his service in the Army Air Force.  His photo albums again reveal a side of him working on telephone poles in the Carolinas and elsewhere far from his roots in Brooklyn, collaborating with teams from all over the United States.  In each of his hundreds of photos, Floyd in his final weeks could recall everyone by name, place of birth, and special interests.  With each person, he had forged a special bond recognizing in each their uniqueness and dignity.  He never forgot them.

Several years later, during World War II, Floyd served in the 15th Air Force with the 449th Bombardment Group.  As a tail gunner and aerial photographer on the B-24-J, the Liberator, he flew with ever-changing teams of ten on 51 missions from Italy to the targeted site-- the Nazi oil supplies in Ploesti, Roumania.  For his service on these little-reported missions, Floyd received the Certificate of Valorfor aerial combat in the European-African-Middle Eastern initiative, four Bronze stars for the Rome-Arno Campaign, Southern France Campaign, the Normandy Campaign, and for Air Offensive of Europe.  Floyd also received two Air medals, two Oak Leaf Clusters, the Good Conduct medal, and two Purple Hearts.

The Daily Freeman (January 4, 2015) featured Floyd’s narrative of his experiences during WWII of having been missing in action for several months in the countryside of Yugoslavia, and ultimately, having been rescued by C-47 Cargo planes that landed in makeshift airfields that were cleared by the downed airmen and the life-saving peasants. Floyd was rescued due to the kindness of strangers.About 500 American airmen, Floyd as one of them, had bailed out into this Nazi-occupied territory of Yugoslavia.  Gregory Freeman in The Forgotten 500 (NAL Caliber 2007) chronicles the OSS’s secret attempts to rescue those airmen in a mission unheard of until recent years called “Operation Halyard.”  Floyd though had told his story to his children, so the truth of the matter was well known by them, though not yet recorded by military historians.  His files had been retrieved by his daughter from the military archeological archive several years before the release of Freeman’s riveting retelling of this military initiative and story of risky rescue.

On Floyd’s second of his 51 flights, on July 22, 1944, he and nine other crew members were forced to bail out of their plane as an effect of the enemy artillery.  Each survived with Floydhaving witnessed the planeexplode into a nearby mountain. After the downed airmen were rescued by the heroic airmen who landed C-47 cargo planes into makeshift airfields between mountains while surrounded by enemy artillery, Floyd and the 499 others returned to Italy.  After time in the hospital, Floyd and other airmen were privileged to meet with Pope Pius XII.  During R&R, they wandered through the streets of the newly-liberated Rome.  Floyd was enamored by the beauty of the Sistine Chapel and the Vatican.Over the years Floyd stayed in contact with one of the crew members from that fateful July 22nd 1944 flight.In recent years only a handful of the 500 rescued airmen were still alive.

After WWII, Floyd was anxious to start fostering his own family ties. Happily married to Virginia for almost 50 years, they raised their family in the Flatlands community of Brooklyn, NY, and in the 1970s, after he retired from the New York City Transit Authority, they moved to Kerhonkson “to get back to the garden”and to raise their youngest child.  There they expanded their vegetable garden, and experienced the great beauty of rural living. Active in the former Kehonkson post of the VFW led by HerbiePopl, and an active members of Our Lady of Lourdes Church, Floyd worked for awhile driving the school bus for Rondout Valley School system, and delivering auto parts for the KinbergBrothers Auto Parts store in Ellenville.  All of his jobs systematically allowed him to follow different tracks on land and in the air.  At one time, he knew every transportation route in Brooklyn, and he could tell stories about every road in and around Ulster County.  Floyd’s passion for transportation spilled into others’ lives, as over the course of his life he taught dozens of people how to drive the car, and two of his children ventured into flight.

After years of living in the mountains, Floyd and Virginia retired to Delray Beach, Florida. There Floyd enjoyed watching the egrets outside his window, exploring the majesty of the Everglades, the beautiful sandy beaches in Palm Beach County, and continuing to celebrate life with his ever-growing family, including his precious grandchildren.  After his beloved wife passed away, Floyd’s passion for rural living called him home to the Northeast.  In his final years, he lived in Olivebridge with his son, Peter, enjoying a simpler life, surrounded by all of nature, loving family, and good neighbors.

Having lived through difficult times and having experienced the kindness and love of many people, especially of those in his family, Floyd’s life spanning almost a century shows the experiences of an ordinary person who has experienced the beauty of an extraordinary life.  While he epitomizes what a poet has called “the last leaf,” he more evidently bespeaks his namesake, “Shanley,” which translates from the Gaelic, as “old hero.”

This old hero, Floyd,two weeks before he passed away expressed his final wishes to view for one last time hummingbirds at the feeder outside his window, and again to see a deer on his land.  During his final breaths, those who were by his side witnesseda deer foraging in tall grassclose by in his side yard.  What more can a person ask for?

If visitors would like to memorialize Floyd, that is welcome, but not essential, as Floyd would say.  Special gratitude is appreciated for the Hudson Valley Hospice, the Franciscan Breadline in NYC, local Veterans of Foreign Wars posts, and the Purple Heart Foundation.

To order memorial trees or send flowers to the family in memory of Floyd F. Shanley, please visit our flower store.