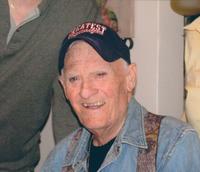 On November 19, 1955 Jack had married Arlene Firstner at the Trinity Lutheran Church in Staten Island. Jack had been a Cub Scouts Leader for Pack 71 of Staten Island and he assisted Boy Scouts Troop 45. Jack enjoyed being involved assisting the minister at the Trinity Lutheran Church and was a Junior Youth Group Counselor. He was an active member of the Samsonville United Methodist Church having been with the choir, the Pastoral Care Team, and served on many other committees. Jack loved the outdoors, hunting and fishing, and especially enjoyed being with his family and friends.

In addition to Arlene, his wife of 58 years, Jack is the father of Arlene Kelly of Samsonville, and John “Jack” Kelly and his wife Sandy of Avenel, NJ, grandfather of Megan and Jonathon Kelly also of Avenel, NJ. Also surviving are his brother Dennis Kelly and his wife Louise of Staten Island and his sister-in-law Frances Kelly of Atlantic Highlands, NJ, and many nieces and nephews. Jack also had a large extended family where he was known to many as “Papa Jack” and “Uncle Jack”. He was predeceased by his brothers and sisters, Loretta (Albert) Smith, Joseph (Susan) Kelly, Mary (John) Glancy, Lillian (Jacob) Helzer and James Kelly.

Visiting will be held on Wednesday, October 2nd from 2-4 & 7-9pm at H.B. Humiston Funeral Home, 30 42nd St., Kerhonkson, NY. A Celebration of his life will begin on Thursday, October 3rd 10:30am at the Samsonville United Methodist Church.

In lieu of flowers contributions may be made in Jack’s name to the Samsonville United Methodist Church Memorial Fund, P.O. Box 1397, Olivebridge, NY 12461.

To order memorial trees or send flowers to the family in memory of John "Jack" Henry Kelly, Sr., please visit our flower store.