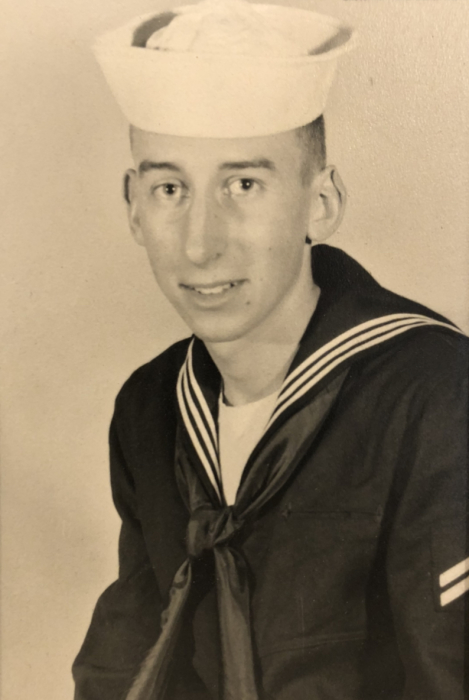 Leonard “Len” Rider of Accord, NY passed away peacefully at home at the age of 83 on February 9, 2021 with his loving family by his side.  Len was the eldest son of Kenneth J. and Thelma (Depuy) Rider of Accord.  Len spent his childhood years working with his parents and brothers, Donald and Richard, on the family farm in Accord.  Len attended Kerhonkson High School, then returned home for a period of time to work on the family farm as well as working on the neighboring Frank Kelder farm before enlisting in the Navy.   While in the Navy, Len served aboard the aircraft carrier USS Essex, where he applied his skill as a welder, attaining the rank of Ship Fitter 2nd Class.  He said there were times when he would hang suspended over the side of the ship in order to weld on the hull while under power.  He commented that he witnessed several planes miss the cable trap upon return to the ship and end up in “the drink” as he put it.  Len’s tour in the Navy was extended unexpectedly due to the “Cuban Missile Crisis” of 1962.  After being honorably discharged from the Navy, Len worked as an over-the-road truck driver for several years while also continuing to apply his skill as a welder versed in arc and acetylene welding for all who needed his services.  It was during this time in his life that he assisted with the raising of his stepchildren Mike, Kathy and Elaine, which prompted him to build an addition on the house in order to provide room for all.  He later drove a bulk feed truck for the Agway corporation for many years, eventually returning home to the family farm to work alongside his brother Donald and his family until 1990 when the dairy cows were sold at auction.  From there, Len went to work for Severyn J. “Joe” Hasbrouck in Hurley as a farm hand, assisting Joe with the production of field crops, all while continuing to assist Donald and his family with the hay harvest on the family farm until his health would no longer allow for it.

Len had many activities he was passionate about which included antique farm machinery, country music that featured fiddlers and square dancing with his long-time companion, Evelyn Davis.  Len and Evelyn were members of the Del-Se-Nango Old Tyme Fiddlers Association and the two loved nothing better than to travel to various dances and events held by Del-Se-Nango where they enjoyed the company of each other and their network of fellow square dancing and fiddling enthusiasts.

Len was affectionally known and referred to simply as “Unc” by his niece and nephews.  “Unc” was a name he was “stuck” with for nearly 60 years and over time, was used by family members of all ages, including his own siblings and sister-in-law Carolyn.  “Unc” will be dearly missed, especially at the annual family chicken barbeques where he became the unofficial “taste-tester” as he was always known to “sneak” a chicken quarter before it was considered done and would grin ear to ear as family members poked fun at him.  A common sight that will never be forgotten!

Funeral arrangements are set for Monday, February 15, 2021 with the family receiving friends and family at Humiston Funeral Home in Kerhonkson from 11 a.m. to 1 p.m.  A service will be held at 1 p.m. followed by burial in the Pine Bush Cemetery.

The Rider family would also like to thank the wonderful staff from Hospice along with Peggy Dennin and Lynette Keator for lovingly providing daily care and assistance to Len these last two years.

Contributions may be made in Len’s name to the Kerhonkson-Accord First Aid Squad, PO Box 67, Kerhonkson, NY 12446 and/or to the Friends Of Historic Rochester, PO Box 229, Accord, NY 12404.

To order memorial trees or send flowers to the family in memory of Leonard Rider, please visit our flower store.